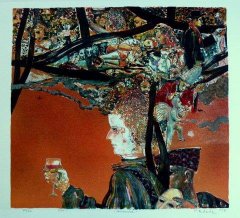 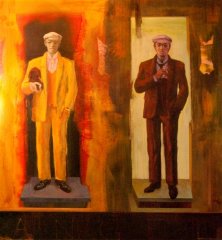 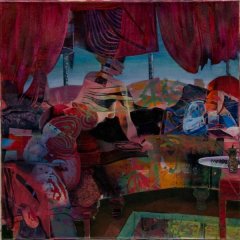 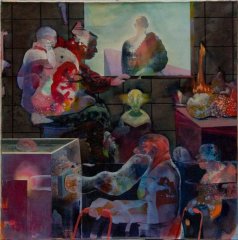 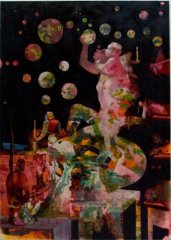 Peter Esdaile was born in Montreal, Canada in 1947 and grew up in Oslo, Norway.
He recieved a professional education at The Arts and Crafts School in Oslo (1966-68) in printmaking and painting, and Norwegian State Art Academy of Oslo (1968-73) in printmaking, painting and sculpture.

Over the years, I have been fascinated by the themes of the individual, gender relations, and the existential dilemmas of loneliness, alienation, confusion and conflict.
Initially, my works, both in painting and prints have been primarily figurative works, characterized by political and social satire, sometimes erotic scenes imbued with both endearment and irony.
Later, I have explored more abstract modes of expression in drawing and printmaking and purposely turned away from representational imagery for some years. An interest in architectural and geometrical space caught my imagination in a series of prints and pastel drawings that could be labeled “The Architecture of the Mind.” This style led me, in turn to a more stylized, abstract expression in my sculptural works as well. For the last 7 years, these divergent phases have intuitively merged into a semi-figurative style, where a representational language reintroduces a new narrative, emerging from basic abstract structures, executed in an expressionist manner.

Today, my works have increased in complexity in an attempt to capture the diversity and confusion of contemporary life. My compositions are typically a mixture of classical glazing techniques combined with energetic strokes, striking colors and a playful use of stencils. Figures and stormy landscapes collide with architectural forms in some paintings, bringing a sense of the timelessness of human experience and tragedy. Elsewhere, symbolic images from history and classical mythology converge with figures from popular culture in a mix of exuberantly satirical collages of contemporary society.
The result is startling vibrant and often hauntingly poetic.